Clarksville High School welcomes in a new resource officer as the old one resigns. Chris Bartley grew up in Clarksville and has been a police officer for three years. But before becoming a police officer, he also had high intentions on helping others. Bartley worked at Jeffboat for 15 years and was also an Emergency Medical Technician for seven years. Criminal justice is what Bartley has his degree in.
Helping others has made a huge impact on the career choices that Bartley has chosen. “I became a police officer for the simple fact that I can help others,” Bartley said. Bartley also teaches bully and rape prevention classes.
Jiu Jitsu and Judo take up most of Bartley’s free time. Spending time with his kids is also an important thing that he makes time for.Wrestling is very important in his life, he has been a wrestling coach for four years at Providence. Oklahoma State is Bartley’s favorite college for wrestling. Oklahoma state has a top ranked wrestling team.The Gracie family and Bartley have trained together. The Gracie family is a family that has dedicated their lives to the practice of Gracie Jiu Jitsu, making them the largest family of athletes in the world.
He wants to show people that being a police officer does not always mean that he is the bad guy and that he is here to protect and serve instead of scaring people and being the bad guy. His main goal with being a police officer is hopefully convincing the public not to take the bad route and to make good decisions that will benefit them, their family and the community.
The school was already an important part of Bartley’s life. The school is not only a big part of the community, but his kids also attend Clarksville schools. “When I came in they asked me things that I can make a difference in and I have an interest in this school, not only to the kids, but I have Tyler that goes to this school and Sarah that goes to the middle school. So I have an invested interest in the kids safety. Not only in my kids safety, but in everyone’s safety so I want to make sure that everyone gets home at the end of the day,” Bartley said.
The main reason Chris Bartley became a police officer was to help protect and educate the community he grew up in, making sure that everyone stays safe in the community is very important. 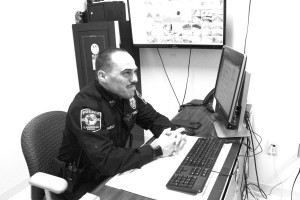 View all posts by tabathas