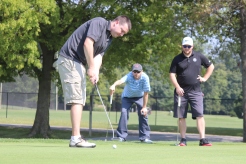 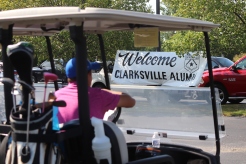 The Annual Clarksville High School Alumni Association Golf Scramble was held Friday, Sept. 21 at the Wooded View Golf Course in Clarksville, Indiana. The scramble helps fund scholarships exclusively for CHS students. There was door prizes, a hole-in-one prize of $10,000 and a chance at a flat screen television sponsored by Doug Fisher State Farm. Fisher is  a CHS graduate of the class of 1979.

“The competition in itself is all in good fun, in which return is for a good cause,” Christie Coleman, one of the directors of the scramble and CHS class of 1993, said. In 2017, the scramble helped to raise $2,500 to create scholarships for the CHS class of 2018.

“We had a good turn out this year, it always depends on our sponsors,” Coleman said. Alumni of CHS and others of all ages are invited to participate in the scramble every year on the Friday of the Homecoming football game, CHS alumni who pay their yearly dues get in to the game for free.

Mixed teams (men,women and youth) were encouraged. “The scramble is mostly from the older generation. There could be many reasons why the younger generations are not involved, work, school or maybe some just are not interested in paying golf,” Coleman said.

More alumni join the scramble every year. “The competition is getting harder and I keep getting worse,” Jason Faulkner, CHS class of 2001, said,”It was my most enjoyable one yet, they get better every year.” Faulkner has been participating in the scramble for more than five years and plans on continuing to participate for years to come, like most people who do play.

“I enjoy it the same amount every year,” Lincoln Ottersbach, Providence High School class of 2014, said. It is not uncommon for people who are not alumni to join in on the scramble. “I meet new people who otherwise I would have never known since I didn’t go to Clarksville. My siblings do (go to CHS) and one day my kids will and it makes me happy to know that me playing can help them and their friends out.”